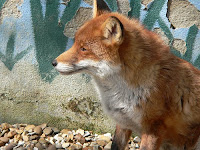 English is an incredibly rich language, a bazaar of many tongues. We are lucky to have a huge vocabulary to draw upon, but as writers we don't want to obfuscate language. Did I just have you reaching for your dictionary? When students begin to write, one of the things they tend to do is use  "suspect verbs", a phrase I invented. Whenever it occurs, I underline the offending verb and, above it, write SV. A couple of examples are "She wended her way to school" and "He masticated his meat." A more natural way would be to say, "She walked to school" and "He chewed his meat."


A simple way to check if a verb you're thinking of using is "suspect" is to say it in dialogue. For example, if you'd written this sentence (shown in red) about a teacher who is dressing down one of her students: "Enough impertinence!" she retorted. Test it by changing it to the first person and say it aloud: I retorted, "Enough impertinence!" Unless you're a pompous person, you wouldn't say "retorted" when you were retelling the incident; you would say something far simpler, like "said" or "shouted". An even better choice would be to leave out the verb altogether. The dialogue is doing the work and needs no help from a pronoun and a suspect verb.

At a subconscious level, I think people use suspect verbs to be considered clever, but its effect is to alienate the reader. As Jonathan Franzen said, "Interesting verbs are seldom interesting." It doesn't mean you can't use language in a rich way, but it must honour your style, your story and your voice.

Adverbs, adjectives and, less commonly, nouns can also be "suspect", as you’ll see in this passage:

He beseeched his spouse to accompany him to the garden to see how those beloved, pungent foxes of hers had wreaked havoc in the crepuscular hours. "Perfidious vulpine creatures!" he exclaimed vociferously. "They have purloined my philtrons!"

As a little exercise, have a go at rewriting this paragraph without any suspect verbs, adverbs, adjectives or nouns.