After attending classes at the City Lit with novelists David Plante and Carol Burns, I formed a writing group with fellow students who were keen to write, keen to learn. More than quarter of a century later, The Group, as we have always unimaginatively called ourselves, are still meeting, still writing.

Members have come and gone, but the core, the heart, has remained the same. One of those is the artist and poet, Keith New. My earliest memories of him are of his wavy, grey hair and beautifully-ironed shirts with “saloon” arm-bands which kept his cuffs from getting dirty. He is older than the rest of us by two and a half decades, but his youthful spirit, energy, constructive criticism and excellent poems make him a valued member of The Group.

Keith's poems often have landscape as their theme. In his poem, “Surrey: A Poet in Residence”, this home county is a place of prim lawns, love and lust, the land of “the everlasting Sunday lunch”:

thoughts of loneliness and death
are mown short as well-kept lawns.
However, love (conjugal) is permitted
preferably when shares are rising.

Keith’s art also has its “well-kept lawns”, but his canvases work very differently to his verse. His land- and garden-scapes present us with beautifully-manicured compositions, as in Act One, Scene One: A Garden in Farnham (below). This is the world as we would like it. His poems are the world as it is: messy, complex, precious. Keith has been seriously ill in hospital. Get well soon, my friend, to write and paint again. 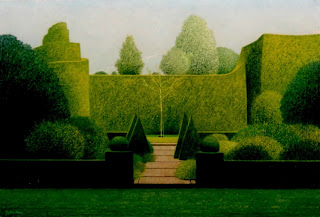