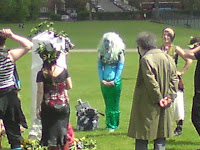 When out walking on May Day, I came across a pagan rite which prompted this blog. I was striding past this circle of celebrants, fascinated by the surreal sequinned mermaid, when I was stopped in my tracks. A member of the group said, loud enough for the nearby crows and dogs to hear, “This is the day of the vulva.” You don’t hear that very often on Hampstead Heath. The General Election got in the way of publishing this blog last week, so here it is. The political and secular interrupting and mixing with the spiritual and personal. That is the story of May Day itself.

In pre-Christian Britain, May Day divided the year into half and was called Beltane. People lit bonfires which were danced around and cattle and young couples passed through the flames to be purified. These rituals were meant to give strength to the spring sun beginning to warm the earth for next year’s crops. In early May, the Romans had a five-day celebration of spring, known as the Floralia, to worship the goddess of flowers. Today, many customs associated with May Day are a combination of Beltane and Floralia: the Maypole (a fertility symbol) and the crowning of a May Queen (the goddess Flora).

In the eighteenth century in France, the May Tree became the “Tree of Liberty” and the symbol of their revolution. May Day went international and took on a secular form. It was the struggle to win the fight for an 8-hour day that resulted in the first May Day parade in Chicago in 1886. Three years later, French socialists declared 1 May “Labour Day”.

There are at least two short stories with this day at their heart: F Scott Fitzgerald’s “May Day” which uses the May Day riots of 1919 to intertwine the lives of drunken socialites and brawling soldiers. In “May Day Eve”, the writer Nick Joaquin shows the oppression of Filipino women who were forced to marry men against their will.