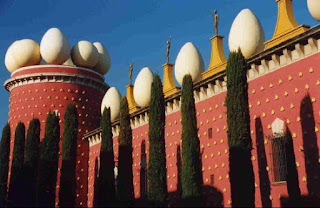 The picture illustrating this blog is a wall covered with loaves of bread which decorate the rear wall of the Salvador Dalí Museum in Catalonia. It was chosen because I have just completed my first novel writing retreat in Spain, close to Dalí’s birthplace of Figueres.

There was something magically surreal about the week, the absence of the reality of my life in North London. At home, I go to bed listening to police and ambulance sirens. In Camós, there was silence, broken only by the bell-like call of a scops owl. I woke to the sound of cuckoos.

On this retreat there were morning workshops that covered six different aspects of novel writing. Lunch was then served on the terrace and, in the afternoons, I offered one-to-one tutorials. Each evening before dinner, we had a showcase night where students read and received feedback on their work.

Some course members arrived with manuscripts they’d been working on for several years, others with just the germ of an idea. Novel themes included the history of the North Tyrol after World War I, a boy whose dead twin speaks to him and the unrequited love of an undertaker and his long-suffering housekeeper. 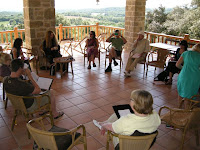 On the chefs one night off (the incredibly-talented Lee Pennington and Debbi Reid), we had gin and tonics, followed by a meal in Banyoles whose lake was the location for water sports during the 1992 Summer Olympics. We ended the week with a fiesta. To get a flavor of the course, click here to view the video which featured the talented Catalan musicians, the Bel and Sammy Duet.

I’ll be back in Camós next year for two workshops: a novel intensive, followed by a retreat for those who want time to write and receive extended tutorials. Click on the respective links above for full details. Stay tuned . . .
Posted by Write Here! at 04:14 0 comments

In a January blog I mentioned that one of Margaret Atwood’s cures for writer’s block was, “Eat chocolate . . . must be dark, shade-grown, organic.” The chocolate tree’s scientific name, Theobroma cacao, comes from theobroma, “food of the gods”. I wonder what depressed writers did before the 16th century when chocolate first arrived in Europe.

In 1528 the conquistador, Hernando Cortés, presented Charles V of Spain with cocoa beans. In Mesoamerica the plant had been cultivated for over three thousand years where these highly-prized tropical seeds were fermented and used to make a drink. Chocolate was also prized as currency. Two hundred beans would buy a turkey; one hundred beans a rabbit. Three beans could be traded for a turkey egg, an avocado or a fish wrapped in maize husks. One bean would get you a ripe tomato.

The Aztecs attributed the creation of the cocoa plant to their god Quetzalcoatl, but it was the Mayan people who gave it the name we use today, xocoatl (bitter water).

Given most people’s taste for chocolate, not surprisingly it features in book titles: Roald Dahl’s Willy Wonka and the Chocolate Factory, Dying for Chocolate (Diane Mott Davidson’s tale of murder in high society) and Robert Rankin’s The Hollow Chocolate Bunnies of the Apocalypse where the inhabitants of Toy Town are killed with chocolate treats!

Writing this blog has reminded me of a handwritten note that used to be on my mother’s fridge: Chocolate is in your mouth for a few seconds, in your stomach for a few hours, on your hips forever. Reading about this “food of the gods” is the best way to enjoy it . . . without any calories.

I’m off now to chew on Laura Esquivel’s Water for Chocolate, a novel which features a chocolate recipe at the start of each chapter and combines Mexican mysticism with Esquivel’s love for this wonderful concoction. Viva chocolate! Stay tuned . . .
Posted by Write Here! at 07:19 0 comments

After years of thinking I couldn’t crack the problems with my second novel, a Bosnian poet, Danijel Lozancic, asked to read the opening chapter of The Double Happiness Company. At the time I was working in East Mostar, the beautiful Ottoman town whose iconic limestone bridge had been destroyed in 1993. I was treating war-traumatised patients with acupuncture when Danijel had heard, through the grapevine, that I was a novelist. He turned up in my treatment room one day with his poems and asked to see what I was working on. The yellowing manuscript of DHC had been in my bottom drawer for years and after he’d read the first few pages, Danijel’s positive reaction excited me enough to make me think this book might be worth resurrecting.

I met Danijel at the Pavarotti Music Centre in 1998, built with money raised by Luciano Pavarotti through his concerts in Modena. I was thinking of the Maestro as I watched him last week singing a short extract of Turandot on Rick Stein’s BBC4 programme, Food of the Italian Opera. Check it out on BBC iPlayer.

According to Stein, food was inspiration, as well as fuel, to the great Italian opera composers Puccini, Verdi and Rossini, who loved their meals as much as their music. The gourmand Rossini once declared that he had only cried three times in his life: once when his mother died, a second time when he listened to Paganini playing the violin and the third time picnicking beside a lake when a warm truffled turkey slipped from his arms into the water.

Rossini was a prolific artist who could compose an opera in less than two weeks, but sometimes left the overture until the day of the première. The composer would be locked in a room with a bowl of cold pasta until he produced it. Once the distraught conductor had his overture, Rossini would be released to feast on a full-blown meal.

Stein said that the Big 3 of Italian opera took their own food with them when they travelled. Maestro Pavarotti followed them in this practice by not only taking his own food with him, but also his Columbian chef. He had his own restaurant, Europa 92, which was housed in a converted stables on the outskirts of Modena. I dined there once as his guest. The best dishes on the menu were pasta and the black rice risotto the tenor loved.

Luciano Pavarotti was a great humanitarian as well as a great singer. He did not have to raise money for the children of Bosnia, or anywhere else. But he did. I was privileged to have attended his “Pavarotti and Friends” concerts for two years running. One of my great memories is of watching Liza Minelli and Pavarotti rehearsing a duet of “New York, New York” wearing a Hawaiian shirt and his trademark scarf. To hear it, click here. I remember him with gratitude and joy. Stay tuned . . .
Posted by Write Here! at 09:34 0 comments 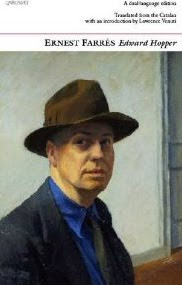 Waiting to meet my editor last week in Foyles, I came across a book cover which stopped me in my tracks: a stunning colour portrait of one of my favourite artists. Inside Edward Hopper was a collection of poetry by Ernest Farrés, published by Carcanet Press. On opposite pages was the same poem in Catalan and English, each in response to a Hopper painting.

I have been a passionate admirer of Hopper’s work for years. His iconic painting Nighthawks (1942) served as an inspiration for a chapter of my book, The Double Happiness Company. At least two other Hopper paintings have wormed their way into my fiction . . . or tried to.

When my first novel, No Angel Hotel, was accepted for publication, I desperately wanted Hopper's Hotel Room for the cover. My novel was eventually published three times by HarperCollins, Grafton Books and St Martin’s Press, but all my editors said, “yellow on a cover doesn’t sell”. I had no choice but to listen, but in my short story, “Secrets”, set in Ireland, the woman in Carolina Morning was the inspiration for the ending and I didn’t have to refer its “use” to anyone:


There is a picture of Eileen Flynn in the family album.
She is wearing a striped dress, a sun-hat, standing
in the doorway of the kitchen, five toes heavenward,
the chunky heel of her shoe resting on the step. The
foreground is in shadow except for a rectangle of light
falling on the hem of her dress. The concrete yard is as
bare as the moon. 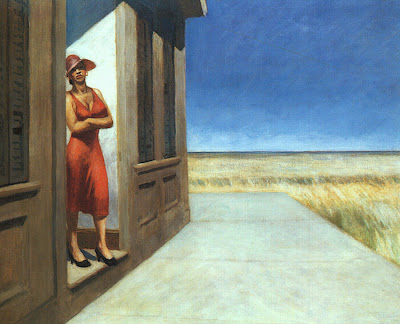 Many writers and poets have tried to interpret Hopper’s themes as stories. Take Nighthawks, for example. Joyce Carol Oates composed interior monologues for the couple sitting in the fish-bowl brightness. Erik Jendresen, author of the film, Band of Brothers, wrote a short story inspired by the painting. The German poet, Wolf Wondratschek, imagined that the Nighthawks’ couple had grown apart:

I bet she wrote him a letter
Whatever it said, he’s no longer the man
Who’d read her letters twice.

His late-night diners, anonymous lobbies, lonely gas stations and empty streets are visual literature. “If you could say it in words,” Hopper once said, “there would be no reason to paint.” I, for one, am glad he was such a mysterious, prolific artist, allowing us to stand before his canvases to ponder his elliptical meanings for ourselves. 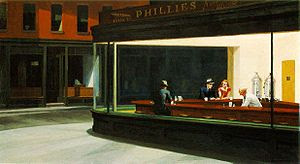