Metamorphosis of a title: Title taddle (2) 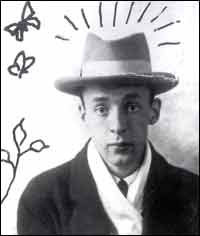 Vladimir Nabokov is known primarily for his infamous novel, Lolita, which was written while travelling on butterfly-collecting trips in the western United States. Everyone knows the title, even though they may never have read it. But the book I’d like to talk about in this second post on titles is one of my favourites.

In 1951 Nabokov published a collection of personal reflections in the United States under the title Conclusive Evidence. In its first UK edition he decided against that name because it suggested a detective story. He suggested to his British editor that it could be rechristened Speak, Mnemosyne. (Mnemosyne being the Greek Titan goddess of memory and remembrance, as well the inventor of language.) His publisher, not unexpectedly, was fearful that little old ladies would not ask for a book whose title they couldn't pronounce.

Nabokov’s achingly beautiful memoir was eventually published as Speak, Memory. The Russian version was published later under yet another title, Drugie Berega (Other Shores).

My own favourite title for this book is Speak, Memory. It is one of the best works of autobiography I have read, one I urge students who are writing memoirs to read it so they can see how a master does it. To tempt you, here is a paragraph from Chapter Three about Nabokov’s maternal grandfather:  “Ivan Rukavishnikov had a terrible temper and my mother feared him. In my childhood all I knew about him were his portraits (his beard, the magisterial chain around his neck) and such attributes of his main hobby as decoy ducks and elk heads. A pair of especially large bears he had shot stood upright with redoubtably raised front paws in the iron-barred vestibule of our country house. Every summer I gauged my height by the ability to reach their fascinating claws—first those of the lower forelimbs, then those of the upper. Their bellies proved disappointingly hard, once your fingers (accustomed to palpate live dogs or toy animals) had sunk in their rough brown fur. Now and then they used to be taken out into a corner of the garden to be thoroughly whacked and aired, and poor Mademoiselle, approaching from the direction of the park, would utter a cry of alarm as she caught sight of two savage beasts waiting for her in the mobile shade of the trees.”

A title is the soul of the book and carries its essence, its themes and its mystery. So, dear reader, make lists of possible titles and try them on for size with friends and strangers. Name your literary babies carefully and, like Nabokov, don’t be afraid to rechristen them if you need to.

PS: This 1925 photograph of Nabokov was doodled on by the writer himself.
Posted by Write Here! at 10:22 0 comments