Love: the origin of creation

Is not love the origin of all creation?
Henri Matisse

When I first came to Europe, I remember going to the old Jeu de Paume in Paris and staring for ages at Claude Monet’s paintings showing Rouen Cathedral at different times of the day. The shimmering effect of light at dusk made me catch my breath in wonder. I stood in front of those magical canvases, wondering how Monet was able to paint something so elusive. I didn't know how he did it, but marvelled at his technical ability. Every brushstroke seemed to catch the love he felt for light. 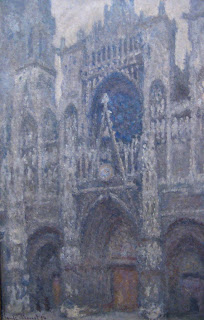 I bought postcards of his Cathedral paintings and pinned them up in my bedsit in London. I stared at them endlessly. My fondness for these canvases made me want to bring them, somehow, into my first novel which I was then working on. The main character, Elkie Bonner, is a romantic from County Londonderry who models herself on Anna Karenina. She falls recklessly, hopelessly, madly in love with a man who reminds her of "Count Vronsky with dark hair". Realising that he will never care for her as deeply as she does for him, she kids herself that, alone, she will tour the world, travel to Moscow and "watch the changing light on the façade of St Basil’s Cathedral. She would never go to Moscow. So little light. So little light in the world."

That was all I was able to weave into the text of No Angel Hotel. Even though the Rouen paintings are not referred to by name, I would like to think those paintings somehow still cast their shadow in the book. Stanley Kunitz wrote about a poem that came to him while he was in his garden. "I dropped my hoe and ran into the house and started to write this poem, 'End of Summer'. It began as a celebration of wild geese. Eventually the geese flew out of the poem, but I like to think they left behind the sounds of their beating wings."

Monet's friend, the writer Georges Clemenceau, wrote an essay about the exhibition Monet held in 1895 of his Cathedral series: "In front of the twenty views of the building by Monet, one notices that Art . . . teaches us to watch, to perceive, to feel. The stone itself is transformed into an organic substance, and one can feel how it changes in the same way that a little moment of life is followed by another one."

Monet painted 31 canvases in his Cathedral series showing the shifting light on the front of the cathedral in sun, rain, at dawn, high noon and dusk. They are held in collections around the world, including the Metropolitan Museum of Art, the National Gallery of Art in Washington DC and the Musée d’Orsay in Paris. Even though they are variations on a theme, I can see the love in every one.