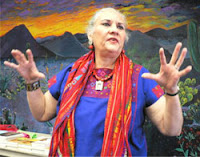 Denise Chávez is one of the leading Chicana playwrights and novelists of the US Southwest. Her books include The Last of the Menu Girls, Face of an Angel, Loving Pedro Infante and A Taco Testimony: Meditations on Family, Food and Culture.

In an interview with William Clark of Publisher’s Weekly Chávez said, ‘Writing for me is a healing, therapeutic, invigorating, sensuous manifestation of the energy that comes to you from the world, from everything that’s alive. Everything has a voice and you just have to listen as closely as you can. That’s what's so exciting—a character comes to you and you can’t write fast enough because the character is speaking through you. It’s a divine moment.’

Throughout her writing she emphasizes the need for comunidad, or community, and that is exactly what she creates in spades at the Cultural Center de Mesilla that she runs with her husband, Daniel Zolinsky. A stone’s throw from where Billy the Kid was once jailed, CCM is a vibrant, eclectic place where you can buy books, new and old, find wonderful LPs which have been donated to the center, attend workshops as diverse as learning about Nahuatl and Mayan teachings to creating a papel picado. There is also a children’s corner and a freezer where you can buy delicious handmade Mexican ice cream. It was at the Cultural Center de Mesilla that my novel, The Double Happiness Company, received its US launch this summer. To view a short video of the celebrations, click here.

The Cultural Center de Mesilla and Denise will be featured in PBS’s “The American Experience”, in a new documentary about Billy the Kid’s life and his relationship to the Southwest and Hispano New Mexico. It will be aired nationally on 10 January. For more information, click here.

Denise is also the Founder and Director of the Border Book Festival, the longest running literary festival in the American Southwest. This year's title is “The Shamanic Journey” (La Jornada Chámanica) which will take place from 20 - 22 April in Mesilla, New Mexico, featuring healers from Mexico to Africa.

While I was in the United States for the launch of my novel, I was honoured that Denise agreed to an interview. “Mango Day” is the result: a 10-minute video where she reads from her moving memoir, A Taco Testimony, and reflects on the process of writing. She has said of her work, ‘My characters are survivors . . . I feel, as a Chicana writer, that I am capturing the voice of so many who have been voiceless for years. I write about the neighborhood handymen, the waitresses, the bag ladies, the elevator operators. They all have something in common: they know what it is to love and to be merciful . . . My work is rooted in the Southwest, in heat and dust, and reflects a world where love is as real as the land. In this dry and seemingly harsh and empty world, there is much beauty to be found.’