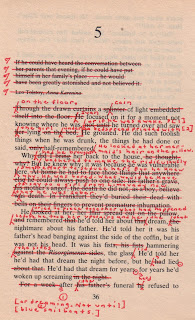 When BareBone Books decided to re-release my out-of-print first novel, I was thrilled. No Angel Hotel had been published many years ago: twice in the UK and once in the US. I hadn’t looked at the book in ages and it was a shock to re-read it.

When it was first published, No Angel Hotel received excellent reviews, including ones in Kirkus and the Washington Post Book World. But reading it again, with a colder, crueler (and more experienced) eye, I was unwilling to publish it in the version that had appeared more than two decades earlier.

Words have power; they are precious, but every word a writer produces is not precious. I often quote William Faulkner’s wonderful phrase to my students: “Kill your darlings.” I discovered that to make the new edition work, I had to kill quite a few youthful “darlings” of my own.

The writer is a puppeteer, creating a world of characters that only exist in a metaphorical theatrical box. The string-puller must invent, clothe and conjure up words for their marionettes to speak. They must move them behind the proscenium arch in a way that is so skilled that an audience suspends belief, surrendering to the irrational idea that  these wooden, wigged figures have lives of their own. During the magical time of the performance, the audience is aware of the puppeteer’s existence (who wears black so as to be as invisible as possible). The audience wouldn’t want the house lights to come up and see the person manipulating the strings. 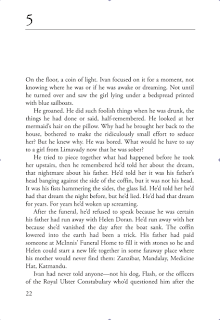 Authorial sentences and “suspect verbs” do exactly this; they reveal the presence of the puppeteer.  So one of the easiest parts of the rewrite of NAH was to delete lines that were suspect, inaccurate, unnecessarily poetic or clever, examples such as these in Chapter 5. (Click on either page to enlarge the text.) In the rewrite, I was relieved to leave these, and many other, cringe-making phrases on the cutting-room floor.

• “Through the drawn curtains a splinter of light embedded itself into the floor.”

Geez, this is embarrassing. Why you may ask? Because pulled drapes allow in more than a “splinter” and light cannot “embed” itself into the floor. A physical impossibility (and a suspect verb, to boot). Old curtains in a child’s bedroom, a small hole through which light can pass, is more atmospheric. And precise.

• “In Frankfurt, they’d buried their dead with bells on their fingers to prevent premature inhumation.”

This might have been credible in third-person narration, but it was an internal thought of one of the main characters after a one-night stand. I don’t think many men think something as arch and complicated as that after mattress mambo with an attractive young woman, even if they are remembering a recurring nightmare about their father’s death.

Risorgimento had to go, too. The word was there because it sounded grand; I liked the sound of it. My younger self was trying to be clever and, for my crime, I am now whipping myself with a wet noodle.

To illustrate the difference in just one page between versions, above is the edited original first page of Chapter 5 and the 2012 edition. If you’re interested in the editorial process, compare the old and new versions, then decide for yourself which is better. I had to.