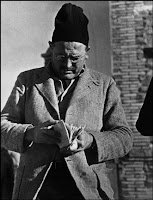 I’ve recently been rereading For Whom the Bell Tolls, a novel I first read in my twenties. Even though it was first published in 1940, seventy-two years later it still has a high public profile. Almost everyone knows the name of this book which is set during the Spanish Civil War, even though they may never have read it.

In discovering FWTBT again, it surprised me that the beginning is so unengaging. I had to read the first 13 pages over and over because, unusually for Hemingway, I found the scene difficult to visualise. There is also an extended military flashback that is intricate and hard to engage with.

I was vaguely aware that Hemingway had had trouble with the ending of his first novel, A Farewell to Arms. When I started rereading his signature novel, my gut feeling was that he'd had trouble with the beginning of FWTBT. But by page 14, he'd changed into a higher gear. From a somewhat shaky beginning, For Whom the Bell Tolls became a breathless, 490 page-turning ride.

The style of the book is quintessential Hemingway: lean, clean and mean. Chapter 10 which describes a massacre in a village is one of the most unforgettable, stomach-churning things I’ve ever read. And he breaks the rules in the way only a genius can. A chapter which is a story, told in flashback, by the character, Pilar.

In my previous blog, I mentioned that, in a dramatic situation, to have a flashback impedes the forward thrust of the narrative and so I was shocked to discover that quite near the climax of the book there is another extended flashback. Robert Jordan, the narrator, is about to set off before dawn to blow up a bridge. The mission is dangerous and Jordan feels “awkward” saying good-bye to his lover, Maria, whom he fears he may never see again. And then Hemingway does something incredibly risky. He talks about another leave taking, one with his father when he was a boy.


Robert Jordan had not felt this young since he had taken the train at Red Lodge to go down to Billings to get the train there to go away to school for the first time. He had been afraid to go and he did not want any one to know it, and, at the station, just before the conductor picked up the box he would step up on to reach the steps of the day coach, his father had kissed him good-bye and said, “May the Lord watch between thee and me while we are absent the one from the other.” His father had been a very religious man and he had said it simply and sincerely. But his moustache had been moist and his eyes were damp with emotion and Robert Jordan had been so embarrassed by all of it, the damp religious sound of the prayer, and by his father kissing him good-bye, that he had felt suddenly so much older than his father and sorry for him that he could hardly bear it.

The flashback in Chapter 41 continues with a description of the train moving away, the station getting smaller, the conductor talking to the boy about how hard the good-bye was on Robert's father and then another paragraph of internal monologue before Hemingway returns us to the present. To the action: the final farewell to Maria.

What remains foremost in the reader’s mind before Jordan goes into battle is not his good-bye to the woman he hopes he will live long enough to marry, but the one with his father about the awkwardness of love. Only a writer of the calibre of Hemingway could get away with a flashback like that.