In the British Musuem is a letter from James Joyce to his one of his most loyal patrons, Harriet Shaw Weaver. It is dated 23 November 1923. In it he mentions that, six months earlier, Valery Larbaud, the most influential French critic of his era, had invented the phrase "interior monologue" as a way of describing the revolutionary last chapter of Ulysses. 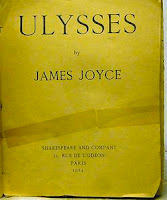 Joyce wrote this eighteenth, and final, chapter in the first person from the point of view of Molly Bloom, the unfaithful wife of Leopold Bloom, one of the novel's main characters. Her soliloquy is a masterpiece, a tour de force that attempts to capture the thoughts leaping through Molly's mind.

Her "Penelope" chapter consists of eight brobdignagian "sentences" that total 4,391 words. The concluding full stop following the final words of her internal monologue is one of only two punctuation marks in the entire chapter.

Larbaud gave his lecture praising Joyce's book to 250 people jammed into two rooms of Shakespeare and Company in Paris. He told the audience something that all readers now take for granted: that the key to Joyce's encyclopaedic work was Homer's Odyssey. Using a scheme that Joyce had given him, Larbaud talked about how the chapters were organized, presenting each one in the terms of an hour of the day, an organ of the body, a color, a symbol. He then read from the book. One of the two sections he chose to present was a portion of "Penelope".

Molly's episode begins and ends with "yes" which Joyce regarded as "the female word" which indicated "acquiescence and the end of all resistance". It is a chapter to be read aloud as it more readily gives up its beautiful logic. I use it as an example in one of my writing exercises to inspire my students so they don't come "cold" to their notebooks. Just hearing a fragment of "Penelope" always produces inspired work from them.

I was greatly influenced by Molly's soliloquy when I was writing my first book and decided to try some interior monologue myself. The passage below appears in Chapter 24 of No Angel Hotel. For the purposes of this post, I have removed the punctuation and capitals at the beginning of sentences in my own crude attempt at a Joycean "sentence":

But if you want the real thing, buy Ulysses, if only for the last breathtaking chapter. It's worth it.