The Arrow of Time 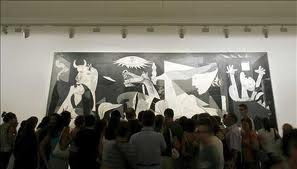 The second law of thermodynamics is known as the arrow of time. In simple terms it means the past is different from the future. It is a closed system, an irreversible process.

But fiction is immune from natural laws and it was with an intake of breath I read the following excerpt from Kurt Vonnegut's Slaughterhouse 5. Here he makes time flow backwards for Billy Pilgrim, a time traveller who is regularly picked up by a spaceship from the planet Tramalfadore. During one of Billy's many travels, he has been a soldier in World War II:

Billy looked at the clock on the gas stove. He had an hour to kill before the saucer came. He went into the living room, swinging the bottle like a dinner bell, turned on the television. He came slightly unstuck in time, saw the late movie backwards, then forwards again. It was a movie about American bombers in the Second World War and the gallant men who flew them. Seen backwards by Billy, the story went like this:
American planes, full of holes and wounded men and corpses took off backwards from an airfield in England. Over France, a few German fighter planes flew at them backwards, sucked bullets and shell fragments from some of the planes and crewmen. They did the same for wrecked American bombers on the ground, and those planes flew up backwards to join the formation.
The formation flew backwards over a German city that was in flames. The bombers opened their bomb bay doors, exerted a miraculous magnetism which shrunk the fires, gathered them into cylindrical steel containers, and lifted the containers into the bellies of the planes. The containers were stored neatly in racks. The Germans below had miraculous devices of their own, which were long steel tubes. They used them to suck more fragments from the crewmen and planes. But there were still a few wounded Americans, though, and some of the bombers were in bad repair. Over France, though German fighters came up again, made everything and everybody as good as new.

When the bombers got back to their base, the steel cylinders were taken from the racks and shipped back to the United States of America, where factories were operating night and day, dismantling the cylinders, separating the dangerous contents into minerals. Touchingly, it was mainly women who did this work. The minerals were then shipped to specialists in remote areas. It was their business to put them into the ground, to hide them cleverly, so they would never hurt anybody ever again.
The American fliers turned in their uniforms, became high school kids. And Hitler turned into a baby, Billy Pilgrim supposed. That wasn’t in the movie. Billy was extrapolating. Everybody turned into a baby, and all humanity, without exception, conspired biologically to produce two perfect people named Adam and Eve, he supposed . . .

Ironically, aerial bombardment was first "practised" on civilians in Morocco by the Spanish Air Force in the 20s, then by the Italians in Ethiopia and then more widely by the Italians and Germans during the Spanish Civil War. The most famous painting depicting bombing from the air is, of course, Guernica. Picasso rarely expounded on the symbolism in his work, but after the Allies liberated Paris in 1944, he explained two of his most important symbols to an American GI who interviewed him in his studio. "The bull is not fascism," he said, "but it is brutality and darkness . . . the horse represents the people."

It would seem that Picasso is implying that the bull is the demon, yet some art critics have suggested that the toro is as guiltless as the victims and no less bewildered than the frantic women and terrified horse. And if the bull is not the aggressor, then the "enemy" is not present on the canvas. An omission that has a chilling message: to victims of modern warfare, the enemy remains impersonal, unknown. This is something the innocents know only too well.