A Farewell to Arms: 47 endings

All writers struggle over writing. Thomas Mann defined a good writer as “somebody for whom writing is more difficult than for other people.” In a previous blog, I wrote about how I sensed that Hemingway had had difficulty with the beginning of For Whom the Bell Tolls. But until recently I did not realise the extent of the trouble he had in ending his first novel, A Farewell to Arms.

In a Paris Review interview with George Plimpton in 1958, Hemingway made the admission that he'd rewritten the ending of A Farewell to Arms “39 times before I was satisfied”. There are, in fact, 47 endings which have been preserved in the John F Kennedy Library in Boston.

In July 2012 the novel was re-released by Hemingway's longtime publisher, Scribner's, which includes all the alternate endings, as well as early drafts from other passages in the novel and the original Art Deco cover of 1929. 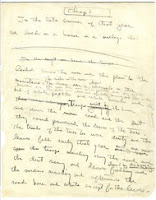 In an age when most authors create on a screen and any changes they make vanish into thin air, this edition offers the opportunity for readers (and writers) to see how the definitive ending of this book was arrived at.

Variations on the novel's conclusion range from a short sentence to several paragraphs: some dark, some more optimistic, even one suggested by his friend, F Scott Fitzgerald. For someone who is interested in process, this edition allows you to follow Hemingway's struggle to discover the ending which feels inevitable: satisfying, logical and unalterable.

In the Plimpton interview Hemingway was asked what had stumped him. His reply? “Getting the words right.” That's pretty succinct. As lean as the 6-word short story that Hemingway once wrote as a bet: For sale: Baby shoes. Never worn.