Books come into your life in different ways. Some are recommended, some are discovered, some are foisted upon you by passionate devotees. I can't remember how In Diamond Square came into my life this year. But ever since it joined my burgeoning Kindle library, I have been a fervent admirer of this powerful Catalan novel by Mercè Rodoreda.

In Diamond Square was written in 1960 in Geneva where Rodoreda was an exile from Franco's Spain. The book had an interesting genesis. As a result of failure.

In her prologue to the novel, Rodoreda said that she had submitted another book, Garden by the Sea, for the Joanot Martorelli Prize and it had been rejected by the jury. As a result of this failure, she started another book, 'driven by a surge of pride'. She said she created it in a fever, 'as if each day I worked on the novel were the last of my life.' She said she wanted the book to be 'Kafkaesque—with lots of pigeons'. She called her protagonist Pidgey.

When I was in Barcelona, I made a pilgrimage to Diamond Square in the quarter known as Gracìa and saw this statue there, uncredited and unnamed. I am sure that many people unfamiliar with the novel are bemused at the half-naked, howling woman about to launch herself into the air. Because I am such a fan of the book, of its pure, clean style, I sat at its base and wrote this in my journal:


In Plaça del Diamant Pidgey is screaming, her mouth open, hands held up as if to defend herself. Her nipples have been daubed with a touch of gold. It is so delicate that, at first, I think it is a part of the sculpture until I notice a splash of gilt on her thigh. Someone has stuffed wilting flowers in her mouth.

I sit below Pidgey to reread the first page of In Diamond Square which is her story and the story of Spain before, during and after the Civil War, but which doesn't mention a single historical event. It is also a novel about love without one scrap of sentimentality.

I look at the square where the fresh-faced Pidgey danced the lucky posey dance with Joe, the brutish young man who would become her first husband, wearing her 'starched dress and petticoat, shoes like splashes of milk'. Motherless Pidgey who had no one to give her advice, who had so many difficulties in her life and yet was so brave and uncomplaining. At the end of the book, she is triumphant because, as Rodoreda wrote in the closing pages, 'inside each puddle, however small, there would be a sky . . .' 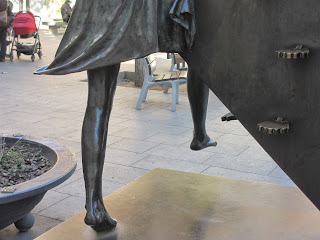