I've been rereading a book from my god sister that was given to me on the morning of my father's funeral. Debra Wechter had known him her whole life and he was like a second father. When she was told of his death, she went to a bookshop in Albuquerque, New Mexico, and asked the sales assistant what might be suitable to give comfort to a grieving daughter. To "two" grieving daughters.

And it was this book, Pablo Neruda: Absence And Presence, which contains a selection of Neruda's poems in Spanish and English, essays and memories by and about him and Luis Poirot's haunting photographs of Neruda's home in Isla Negra.

Debra immediately bought the book, jumped in her car and drove 240 miles to attend the funeral. Over 20 years later, I can still see her in my bedroom, handing me this most special of presents that contained a poem so fitting and beautiful that I asked her brother to read at the service because Debra didn't think she could get through it. But that is not what this post is really about; that is back story. What this post is about is how something else arrived in someone's possession. How Pablo Neruda came to own this horse.


In his Isla Negra house overlooking the Pacific Ocean, Neruda collected many wonderful, whimsical things. One of them was this wooden beast. This is what Pablo's widow, Matilde Urrutia, had to say how it came into her husband's possession:

That horse was in a hardware store in Temuco. When Pablo went to school, he had to walk down that street, and he always noticed the horse and stroked its nose. He grew up seeing that horse every day, and thought of it as his. Each time we went to Temuco he begged the owner to sell it to him, but never with any result. Nor did his friends get anywhere with the owner. But one day the hardware store caught fire. The firemen arrived and, naturally, many people, among them friends of Pablo. Afterward they told us that there you could hear the single cry: "Save Pablo's horse! Don't let the horse burn!" And so it was saved—it was the first thing the firemen took out. Soon after, everything saved from the fire was auctioned off. The owner, who knew Pablo's passion for the horse, planted his own people to send the price up. He knew that Pablo would not let his horse get away, however high the price. 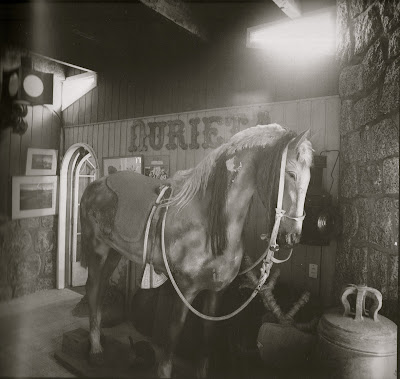