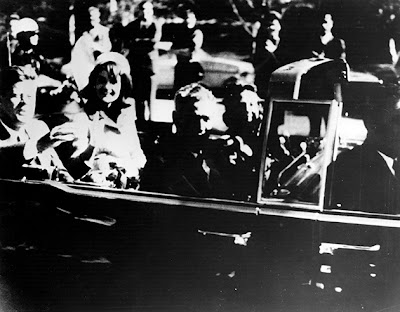 On June 4, 1963, JFK signed Executive Order 11110. This little-known presidential decree effectively stripped the Federal Reserve Bank of its power to loan money, at interest, to the US Federal Government. With the stroke of a pen, President Kennedy declared that the privately-owned FRB would soon be out of business.

More than $4 billion in United States notes were brought into circulation in $2 and $5 denominations. $10 and $20 US bills were never circulated, but were being printed by the Treasury Department when Kennedy was assassinated. The US notes he had issued were immediately taken out of circulation and Federal Reserve notes continued to serve as the legal currency of the nation. So who did kill Kennedy: the Soviets, the Mafia? Or perhaps a hit man paid by the Federal Reserve Bank?

In Jay Busbee's article, "Ten Facts You Don't Know about the JFK Assassination", he says:


November 22, 2013, marks the 50th anniversary of the assassination of President John F Kennedy, one of the most momentous and scrutinized moments in American history. Even half a century later, questions persist: Who really shot Kennedy? Was there a conspiracy to kill the president? Why are there still so many loose ends and secrets?

With the benefit of both distance and technology, we know far more about the events that fateful day in Dallas than Americans did at the time. But facts rarely get in the way of a good story, and the JFK assassination is a story tailor-made for a novelist.

Busbee is correct in saying that this is a story best told by a novelist and, five years ago, I read an excellent one by Elise Valmorbida, The TV President. From the first page, I was hooked by its fresh, original voice and black humour. Page by page, chapter by chapter, I couldn’t wait to read what happened next.

Literary satire has a long and distinguished history: from Gulliver’s Travels and Huckleberry Finn to Orwell’s prophetic 1984. Valmorbida’s book focuses on something that is very much part of the zeitgeist: the desire for fame and the manipulation of public opinion by the mass media. To give you a teaser, The TV President is about a US reality show which faithfully re-enacts the three months leading up to the 1963 Dallas motorcade. Two JFK lookalikes, who have been voted to participate by the public, compete to win the big jackpot while the viewing public vote on how well the contestants perform. In exchange for fame and the promise of big bucks, the JFKs sell their souls to Reall Life, the production company who have created the show. The two lookalikes agree to everything Reall Life tells them to do, including rumpy pumpy with the lookalike “Marilyn Monroe”, sex that is televised live to the nation to those viewers willing to pay for it by credit card.

Spoiler alert. Things take a darker turn when people on the show REALLY start dying, first “Marilyn” in mysterious circumstances, then one of the JFKs. Which president has been fatally wounded during the motorcade and who's done it? Was it a member of the viewing public or has the production company arranged the murders to boost ratings? Who deserves to win: the dead JFK or the wounded one who is televised 24-hours a day from his hospital bed? Under constant surveillance and afraid of being killed themselves, Jackie, the real wife of the assassinated contestant, and the wounded lookalike go on the run. They disguise themselves in burqahs while the viewing public chillingly continue the game, voting for the “best” JFK and betting on the possible assassin (or assassins).

Valmorbida made three separate trips to the States to research material for this book: first to Dallas, then to Detroit, then a road trip covering the drive her characters make in the novel. Her sharp eye and Annie Proulx-like attention to detail is why The TV President feels so eerily true.

I realized how prophetic her vision was when, after the book's 2008 publication, I started to see newspaper accounts of bank robbers disguising themselves in burqahs and that there was even a Dutch website where bets were then being taken when Jade Goody would die from her recently-diagnosed cancer. Seeing that this was happening, some of the fictional events described in The TV President have already proved, sadly, not so far off the mark.

In a society where people are willing to change their face or select their spouse in the public eye, Valmorbida gives us a glimpse of how far we might be willing to go in the pursuit of fame and entertainment. It shows us, not only how much we can be manipulated by the media, but also our willingness to feed on it.

This novel is full of dazzlingly good writing, plot twists and a surprising ending. As far as I’m concerned, The TV President deserves to be a cult hit.